We Are Almost There! Preparing for the Beta Build

Home   News   We Are Almost There! Preparing for the Beta Build
Doppler

It’s been a while and we apologize for the delay, but we are back with another update! If you are ever anxious, or just want to check in with us, feel free to leave a comment here, or send us an email at support@paloaltoinnovation.com, and we will do our best to respond in a timely manner. Of late, we have been working hard on the Doppler and as such, this update got put on the back burner for a while.

Let’s start with the important news first: last you heard from us, we were targeting a December ship date and we are happy to say that nothing has changed in that regard. We are still hoping to get you your Doppler by the end of the year!

So, what have we been working on? In this update we will discuss the beta schedule, the development of the App, over the air updates, our flashing rig, USB-C, and an updated packaging sample. Strap in, it’s a good one!

Since we are still on schedule for December delivery of the production units, we wanted to update everyone on the status of the Doppler Beta run. The biggest remaining potential hurdle for the Beta units is making sure everything is finished before the Chinese Golden Week holiday -- which begins on October 1. The reason this is important is because, like Chinese New Year, everything shuts down during this holiday, and we don’t want our schedule to be negatively affected by this shutdown. In pursuit of this, we have ordered all the necessary parts for the 200-unit Beta run, and are pushing our suppliers to ensure that everything is ready and in place for Beta production in September. Once we have all the necessary parts in-house (in our Chinese factory), we will begin the process of building up the actual Dopplers. This starts with assembly of all of the proper components on each of the FIVE (!!) circuit boards that run the Doppler. Once all the components are assembled onto the circuit boards, we will test the functionality of each of the boards before flashing each Doppler’s PicoSOM with our software (more on this later), and then assembling it into its Beta form. After assembly is complete, the quality assurance (QA) team will go through every detail of each and every unit to ensure complete functionality and make a note of any improvements we can for the production run. Once the QA team has released the beta units, we will ship them to PAI headquarters and from there, on to our Beta backers. We will be in contact with all Beta backers this week to verify that we have their correct address on file, and that they are still willing to be one of our testers. At that point, we will be relying on our Beta backers to give us any and all feedback they can regarding the Doppler (including things like unboxing experience, build quality, and app).

Assuming things go according to plan, the Beta units will be in our Beta testers’ hands towards the end of October. 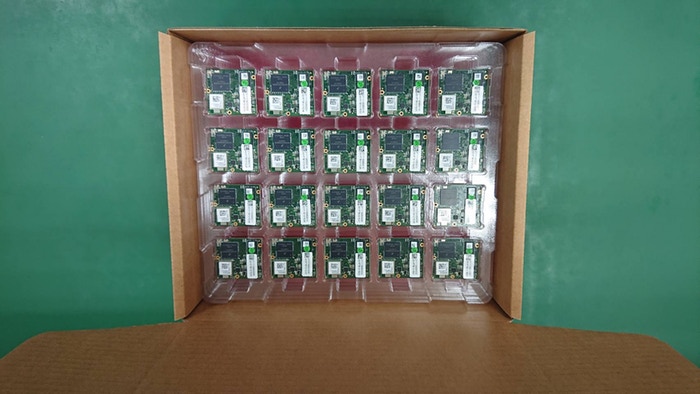 The PicoSOMs for the Beta units, ready to ship to our factory!

While our manufacturing team has been hard at work procuring all the various components and preparing for the Beta run, our App team over at Zemingo (we discussed this relationship here) has been working on the Doppler App. For the Beta of the app we are concentrating on the most important aspects of the Doppler -- in the parlance of software development, this is called the minimum viable product (MVP). So what are the MVP features of the Doppler App? The onboarding, which allows the Doppler to connect to Wifi and Amazon Alexa is obviously necessary to allow it to connect to the internet. The alarm clock-specific features are also important for an alarm clock (duh), so the ability to edit and remove alarms made it into the MVP along with some various different alarm sounds that we would like feedback on (see below). We want to take this opportunity to make it clear -- the MVP version of the Doppler App is just the bare bones and not representative of what the final App will be -- once the Beta is over and everything is working well, we will start adding the rest of the awesome features we want for the Doppler app to have. We also plan on continuously adding new features to the App after launch as well. This being said, we still want feedback from our Beta testers on the features included in the MVP version of the App to find and fix any bugs or other issues with the App’s foundation before we move onto more complex features. 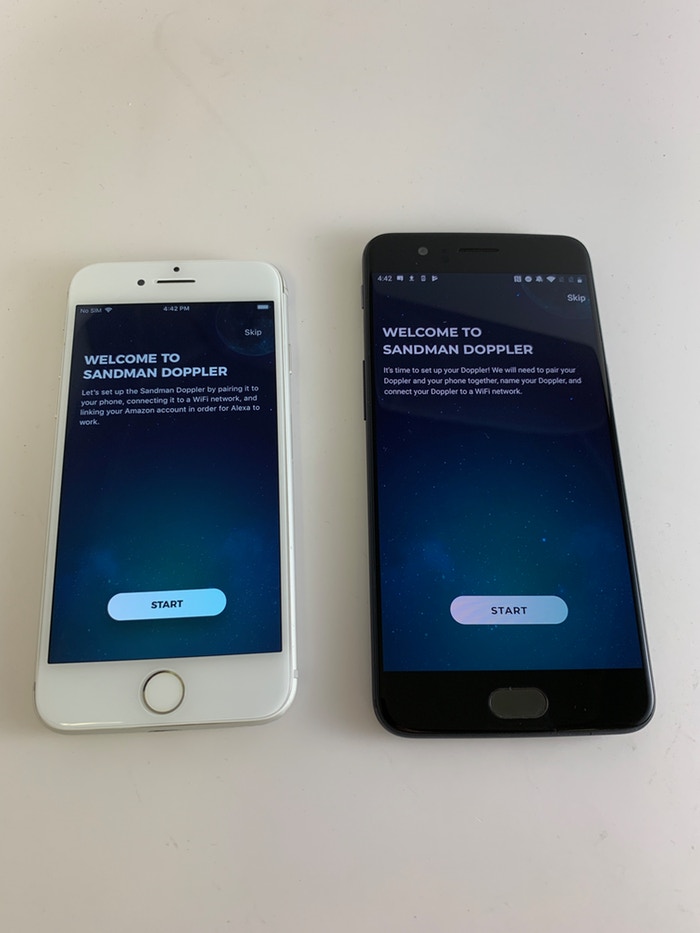 Our app running on both an iOS and Android!

One of the things we are working on with the App is the alarm sounds that will play when the Doppler’s alarm is going off. People tend to be very particular about the type of alarm sound they want to wake up to. Some people want to wake up slowly and softly while others want to be jolted awake with loud noises to make sure they wake up. But the question remains, what kind of alarm sound do you want to wake up to? Please sound off in the comments about your favorite alarm sounds and what you think the best sound to wake up to is. We know that there are lots of different opinions here, so we want to collect as many as possible before making any decisions.

At first glance, the Doppler might seem like a relatively simple product, but its simple form belies the complexity of its components. Inside each Doppler, there are actually three different main chips that control various parts of the Doppler. The reason for this is to maximize the Doppler’s operational efficiency. Each of the chips used specializes in a different task or type of task. The main Linux computer, the PicoSOM, is the brain of the Doppler and controls everything about the product. The microcontroller controls input/output (I/O) -- buttons, switches, light sensor, and battery backup functions. The third chip is the digital signal processor (DSP) which handles the speakers and microphone. We mentioned in a previous update that we had built over-the-air (OTA) updates into the Doppler’s software, allowing us to push software updates to the PicoSOM wirelessly. Now, we also have the ability to push OTA updates to the microcontroller and DSP, in addition to the PicoSOM! This required us to port a piece of software for both the microcontroller and DSP to the PicoSOM, then build utilities into the PicoSOM’s OTA updater which re-flash those components when an update occurs. This wasn’t easy to implement, but it is an important, foundational feature of the Doppler. With this change, the Doppler is now able to update all aspects of its software on all of its chips, both wirelessly and automatically. 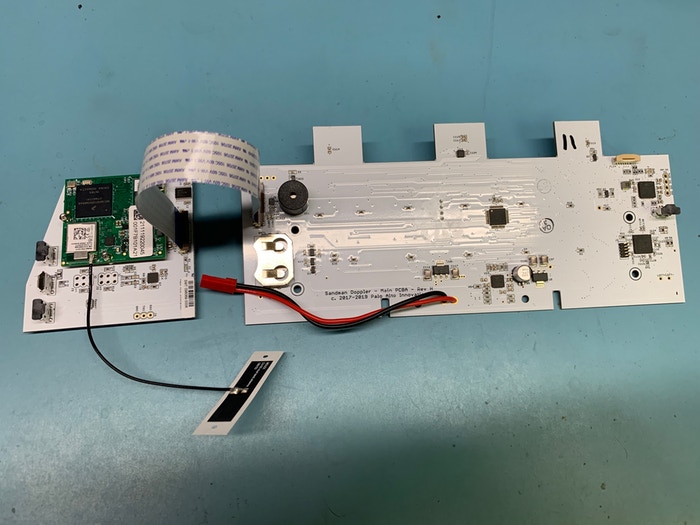 We can now update all the things!

As an aside, if you’ve been wondering what we are talking about when we keep mentioning “flashing”, worry no longer! Getting each PicoSOM ready for its Doppler is a process that involves flashing, or transferring an image file to the flash storage built onto the PicoSOM. Previously, we would flash each PicoSOM one at a time, and the process took about 4 minutes per unit. This was fine when we were dealing with lower quantities, but as we start ramping up production, it’s clear how much time this could end up taking. In order to do this more efficiently, we have created a “flashing rig” using our in house laser cutter that mounts 10 PicoSOM flashing boards (called PicoPi’s) to a piece of plastic. We will then connect all 10 PicoPi’s with USB-C cables to a USB hub and then into a computer with a flashing program on it. We are currently 3D printing some “walls” that will go under the white sheet of plastic and sandwich all of the cables and the USB hub with a second sheet of plastic so that there will just be two wires (power and USB) needed to flash all 10 of the PicoSOM’s at once. We are also going to finish it up with the rubber feet to protect the flashing rig from slipping and shaking. This rig will allow us to batch flash the PicoSOM in batches of 10, plus we think it looks pretty cool, so we thought we’d share it. 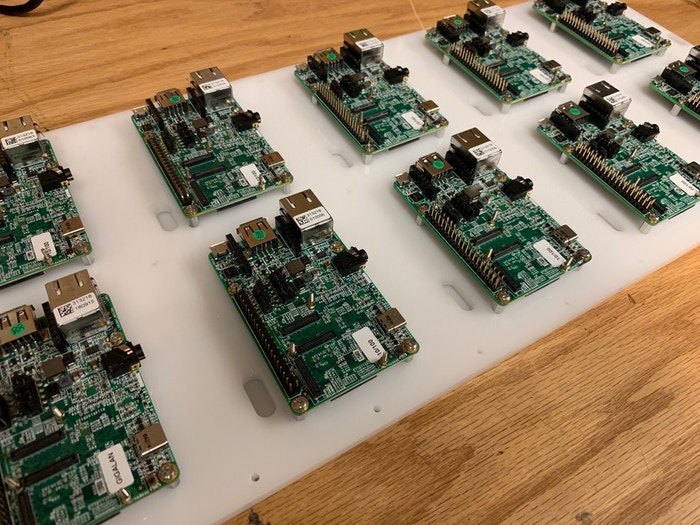 Let’s talk quickly about USB-C. The Doppler was always meant to be upgradeable to USB-C. The original plan was that we would ship a replacement USB-C circuit board and new back plate to those that had ordered the upgrade, and they would be able to remove the old USB-A board and install the new board and back plate themselves. We have decided that we will now be handling the upgrade on our end to ensure the highest quality installation. Anyone who has already ordered the USB-C upgrade will have their Doppler ship with the upgrade pre-installed. We are working on the details of the process for those who decide they want the upgrade later, but rest assured, we will take care of our early supporters. Along with the news that the USB-C upgrade will be pre-installed, we would like to announce an addition to our Sandman-branded cable lineup!

We have tapped our cable manufacturer and had some Sandman branded USB-C cables made. These cables are very high quality, and we are quite happy with how they turned out. The cables are also flat, which will make it easier to utilize the cable management feature of the Doppler. As of right now, we will have the following new cable configurations in 4-ft. lengths and black color: 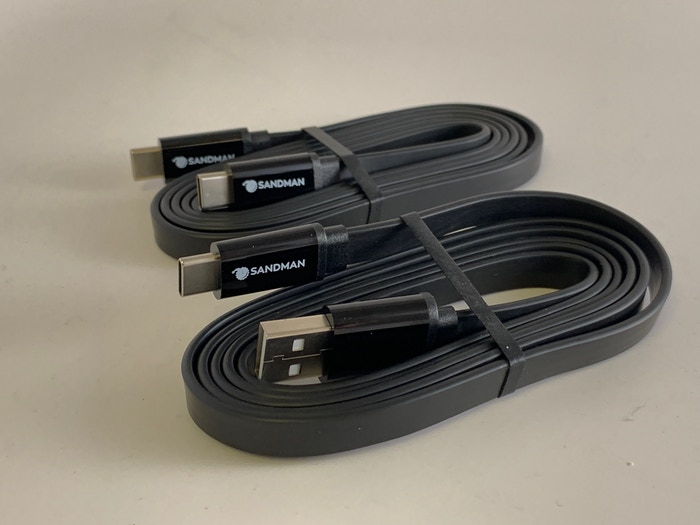 These products will be available in our Backerkit shortly, so you’ll be able to add these new cables to your Backerkit pledge, and they will ship when your Doppler ships. We will also be adding them to our website, so they will be available for anyone to purchase in the future. By the way, we updated sandmanclocks.com, check it out when you get a chance!

We’d also like to share an updated packaging sample we have received from our packaging supplier. It’s looking good and we are hoping to gather good feedback from our Beta testing! 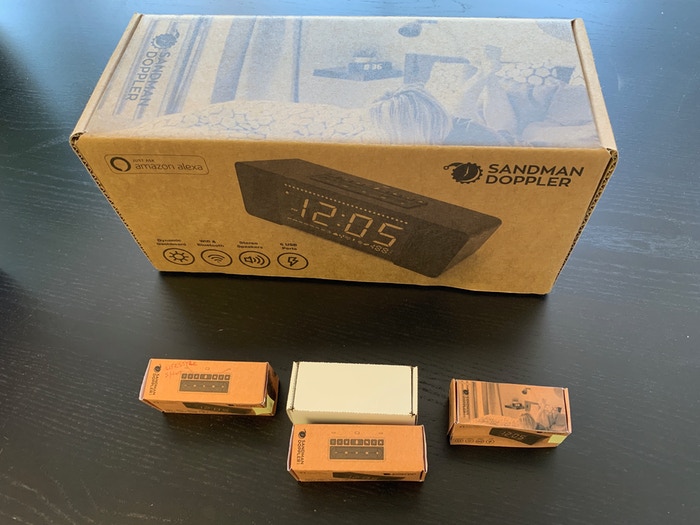 Our most recent packaging sample. It looks awesome!

We hope you guys enjoyed the update, sorry it was late. We plan to have the next one for you during the Beta build.