First off, we apologize for the delay in this update. We have been doing our best to keep you up to date on our progress, but things slipped a little bit since we have been so busy lately.

So, what have we been working on? Well, in our last update we discussed our Alpha build and how the units performed at the biggest trade show of the year. In this update, we will first discuss our over-the-air (OTA) update and battery backup solutions. Then we will get into some details on our alpha and beta runs!

Over The Air Updates

As mentioned in the previous update, our plan is to continually add features to your Doppler, even after it ships. In order to do this, we will need a robust OTA update solution that allows us to remotely update the software on the Doppler easily, safely, and securely. This is not an easy task, but we are happy to announce that it is working! We are able to remotely update a Doppler with the click of a button, when this happens the Doppler downloads the update from our servers and then restarts with any new features or fixes we have implemented. This is all done securely, so fear not, nobody is going to be hacking your Doppler. Another potential issue with over-the-air updates is what to do when a planned update doesn’t work correctly. The big concern with this issue is: if there is something wrong with the update, what happens to the Doppler now that it has bad software on it? Fortunately, this is something we have thought about as well. If something goes wrong during the update our solution will automatically revert to the previously working software of the Doppler, this is called failover. This will prevent the majority, if not all of the issues that can be caused by the updates. Getting this updater working also allows us to streamline our development process and guarantee that all Dopplers in the world will be on the same software version, at the same time. 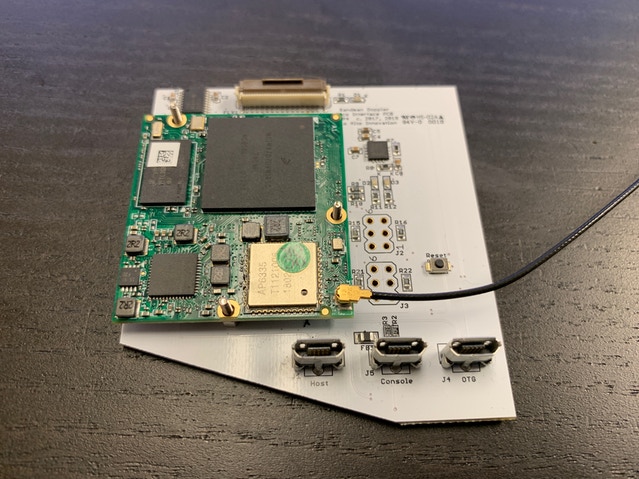 This can be updated from anywhere in the world! Pretty cool huh?

One of the software features we have been working on is the internal battery backup. Having a smart alarm clock is great, but what happens when the power goes out? The Doppler has an internal rechargeable battery backup that will keep the time and still wake you up at the proper time if the power goes out in the middle of the night. How does it do this? When the Doppler senses that power has been lost it shuts almost everything down and goes into a low power “sleep mode”. This sleep mode turns off all USB charging, all the lights/displays, and the Linux computer. The Microprocessor remembers the current time as well as the next alarm that is supposed to go off. If the power is not restored by the time the alarm is supposed to go off a buzzer will sound waking up the user. This is powered by a small coin cell battery that is on the button board which is constantly recharged and never needs to be replaced. All of these battery backup features are automatic so you should never have to worry about setting your alarm, the Doppler has you covered! 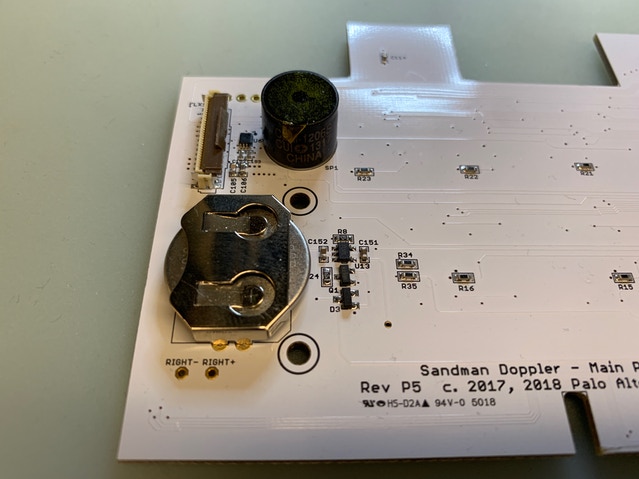 The battery backup portion of the Doppler board

Another issue we have noticed is the long boot time of the Linux computer. Currently, it takes about a minute for the Linux computer to start up and get Doppler’s functions running properly. For normal embedded Linux products, this wouldn’t be a big deal, but with an alarm clock it is. We decided against using an external power light on the device because we wanted the room to stay as dark as possible. What this means is that when you initially power on the Doppler, it would appear as though nothing is happening for the first minute or so. As you might imagine, this makes for a very poor user experience and we are working on firmware to fix this. When the firmware fix is implemented, and you plug in the Doppler for the first time, you’ll get lights right away (although the time won’t be correct until you either manually set the time, or you connect to the internet). We are still working on these features and with our over-the-air software updates, we will be able to add new ones as we create them!

In our last update, we talked about the Alpha units we made and debuted at CES. Over the last couple of years, our engineers here at PAI Headquarters have learned a lot about the best way to assemble Dopplers quickly and efficiently. Recently, we have been transferring the knowledge we have gained to our manufacturing team in Shenzhen, China. This will help them to build Dopplers even more efficiently than we can stateside. Because the Doppler will be mass-produced overseas, they will be using pick and place machines to load up the Doppler boards with electronic components much faster and more accurately than doing it by hand. Pick and place is a cornerstone in the electronics manufacturing world as it takes the incredibly tedious job of placing components onto a board and automates it to a staggeringly fast speed. We have gone over the manual process before in a previous update but for a quick refresher, you start by placing a substance called solder paste onto the gold parts of the circuit board, these are called pads. The majority of the parts on the Doppler’s circuit boards are about the size of a grain of rice, or smaller, and these parts have to be placed with extreme precision in the proper orientation onto the pads of the circuit boards. Once all the components are placed, you put the boards into a special oven called a reflow oven which heats to a specific temperature in order to melt the solder paste and “glue” the tiny components to the circuit boards using a conductive metal called solder. Previously, we have worked with a local assembly house and all of the components were placed by hand! It took over 30 minutes per board and was incredibly difficult work, but it’s how prototype boards made. When mass-producing boards like we will be doing with the Doppler, you receive most of the small components in giant reels, kind of like an ammo belt allowing the machine to access the parts easily. 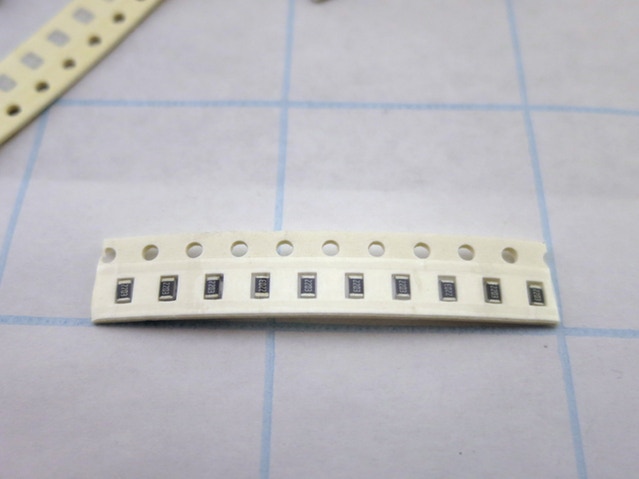 A small section of a reel of resistors

These components are then fed into a feeder which gets placed inside the pick and place machine. Next, a machine reaches down and uses a tiny vacuum to pick up a single component and place it onto the boards in the correct spot. Since the parts are so small, there will frequently be an optical inspection step in between picking up the part and placing it on the circuit board to make sure that the machine has indeed picked up a part. Once the parts are put onto the circuit boards, it goes through a separate automated optical inspection (called an AOI) and then into the reflow oven to permanently attach the parts to the board. These pick and place machines will be able to do a Doppler board in less than a minute; some of them can place 100,000 parts an hour!

We are currently programming the pick and place machines for the overseas Alpha run, this will allow us to begin to fine tune all of these steps to make sure the Doppler boards are made efficiently and with a high yield once production starts. By next week, the boards for this overseas Alpha run will be ready to pair with the modified plastics discussed in previous updates. Once we have verified that everything looks good with these units, we will be ready to hit “GO” on the Beta.

Let’s discuss the Beta test. Whenever you build a new product you want to do a pilot run to make sure everything is working properly. We are going to be sending these pilot units to our beta backers. The beta backers will be working closely with us and finding any and all bugs or imperfections they can with the Doppler before it gets into consumer’s hands.

Building 200 units of something isn’t easy, let alone 5,000 which will be the size of our initial production run. It requires a lot of planning and forethought. Over the past month, we have been working very closely with Future Electronics and our manufacturing team to purchase all the electronics components for the Doppler. While this sounds simple on the surface, it’s actually a monumental task. The Doppler has 497 individual parts from 40 different manufacturers on its various circuit boards! Each of those parts requires us to negotiate with a salesperson from that manufacturer or distributor to make sure they can get us the parts when we need them and at a reasonable price. Having Future Electronics on-board has been a huge help since they do a lot of the work for us, but it’s still taken quite a bit of time. The electronics industry is an ever-changing landscape and lead times can be a huge issue. These lead times can be 6-12 months (yes you read this correctly), so we are working on finding a replacement for these parts and buying them up and storing them to avoid these long lead times. Once we have sourced all necessary replacements we will work on getting as many parts as possible for the production build in-house before the beta build is completed. We are hoping to get the Beta build started by the end of the month! Beta backers, stay tuned for more updates coming in the next couple of weeks! 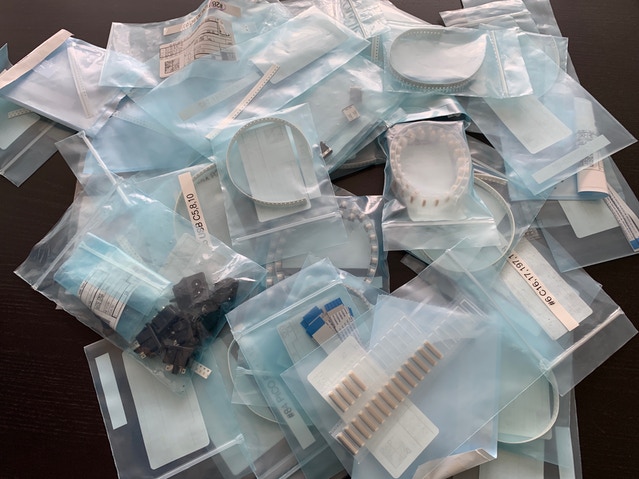 Some of the parts that make up a single Doppler!

Thanks again for your patience and as always, if you ever have any questions, please let us know in the comments below!