We survived CES! It was quite an ordeal, but well worth it. In this update, learn about how CES went for us, what we learned about the Doppler, and what the next steps are.

A quick note on the schedule. Our earlier estimate of shipping production units in March was a bit too optimistic, as it was predicated on the Alpha units being basically perfect. We were hopeful that these Alpha’s would look a little better than they did, but unfortunately, that wasn’t the case; we have a full breakdown of the issues in this update. However, the small delay does give us the opportunity to make sure that everything is absolutely perfect with the Doppler before we get the production units into your hands. The good news is that none of the issues we discovered are major, and once everyone is back from the Chinese New Year holiday (more on this below), we will have a clearer picture of how much time it will take to resolve the issues preventing the Doppler from looking its best. Assuming all of the mechanical parts look good (more on this below), the biggest issue in getting production Dopplers into your hands is going to be the lead time for the electronic components. Some of these parts have multiple month long lead times, and we are working with all of our vendors and suppliers to get enough parts for the beta and initial production builds ASAP. We don’t want to give any incorrect information, but our initial rough estimates is that we will begin shipping Dopplers in April or May. Stay tuned for the next update and we will have a more accurate timeline. Thanks again for your patience, we are getting really close!

This was our third time exhibiting at CES and it was our biggest and most successful show to date. Check out the last update we posted from the show floor! The show was a huge success and we met lots of past, present, and future customers. We also met quite a few backers at the show this year, thanks again for stopping by and checking out the Doppler everyone! We also met numerous current and potential partners to help the Doppler grow and expand.

At CES we also got some really great press for the Sandman Doppler. For example, check out this video from a Youtube channel called The Hookup. Yup, he called the Sandman Doppler the best smart home product at CES. How awesome is that!?

In a previous update we discussed our Alpha build. These were the units that we used at CES. So, how did the units look? In short, they looked very good. Everyone at the show was very impressed and happy with them and so are we. That said, we have very high expectations and want to deliver a high-quality product, so we weren’t 100% happy with these units. Since our goal is to make sure the Doppler is the best product (it can be/possible/etc.), as soon as we got back from the show, we started working with our overseas team to fix a couple of issues we noticed. 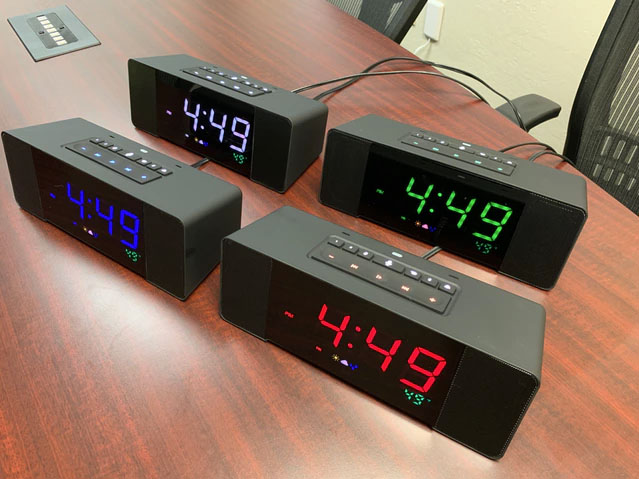 Some of our Alpha units

The window on the Doppler is the piece of transparent plastic over the front display. This is a vital piece and the current windows just didn’t fit quite right. You’ll notice that the window tends to bow out, or not sit flat on the front of the alpha units. There is still some tweaking to this part and we are hoping this next revision of the part is going to fit juuuust right. 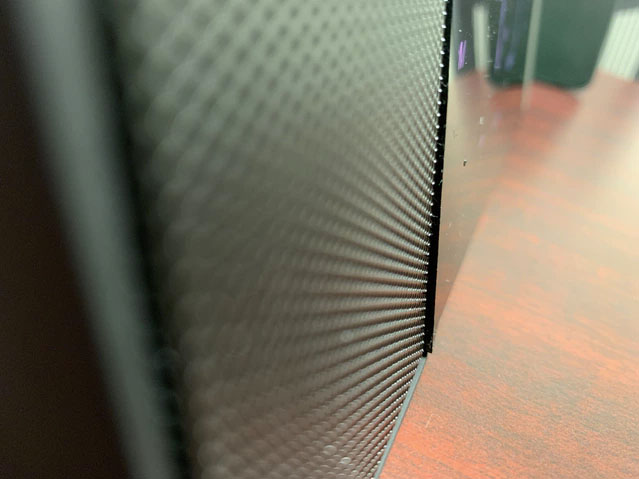 Another issue with the window was the tint/color. With the tint, some of the windows were too dark or too light which means that they weren’t letting the proper amount of light from the LEDs through. A related issue has to do with the color of the window, both in terms of getting the proper color, and making sure the windows are consistent with one another. In the below picture, all of the Dopplers are set to the same color (white). You can see pretty clearly that although the color of the LEDs is the same, they look very different. This is something we are working on and will fine tune with our overseas team. 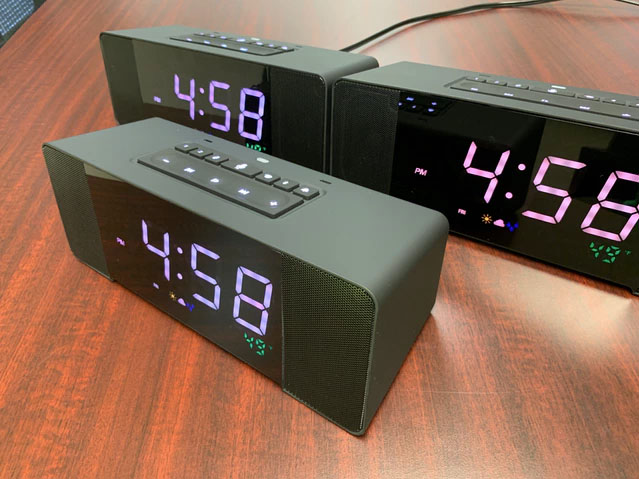 All of these are supposed to be the same color 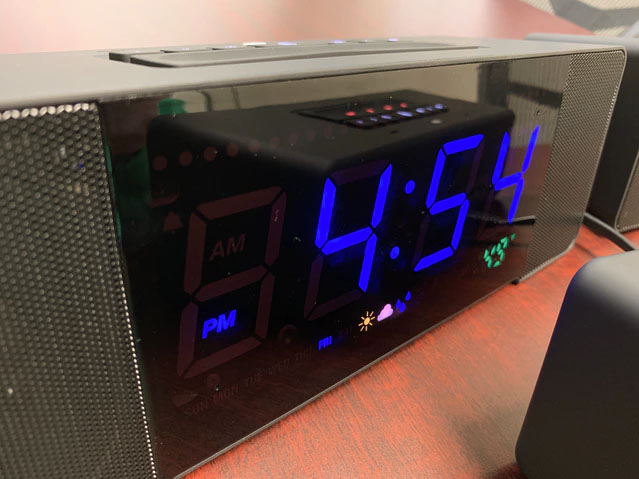 This window is a little bit too light

Finally, the consistency of the colors on the buttons is not quite right. Some of them aren’t looking as “white” as we would like, and that inconsistency causes some of the buttons to look pinkish when they should be white. This is most noticeable at night, and is basically impossible to photograph. You're going to have to trust us on this!

Unfortunately, we are currently in the period of the year where almost all work in China stops due to the Chinese New Year (CNY) holiday. Officially CNY is a 7-day holiday but from our experience, most factories end up shutting down for 2 full weeks. Some suppliers like to take the week before and/or after the holiday off as well, resulting in a shut down of up to 4 weeks. While this is a major shutdown and time sink, it is something that we had planned for. So, even though China is taking a break, we are not (more on this later). We expect everyone to be back up to speed by the last week in February.

Once the CNY holiday is over and all our suppliers are back to work, we will make sure all the new tooling modifications look good and begin ordering all of the parts for the beta test build. As is standard practice in manufacturing, the beta units will be assembled at the same factory in which the production units will be made. This allows us both to create all of the quality assurance and assembly instruction paperwork, and then refine the process as needed to ensure the Dopplers are built the same every time and meet our high-quality standards. Once these units have all been tested and approved, we will ship them back to our offices and then on to our beta backers. Beta backers, make sure to keep an eye out for emails from us in the coming weeks and months! Your role in this part of the process is very important in the final development of the Doppler.

So, what have we been up to?

While CNY has been happening we have been spending most of our energy working on the software of the Doppler. As great as the Doppalator is, having an Alpha unit on your desk to play with and fix bugs is super handy! 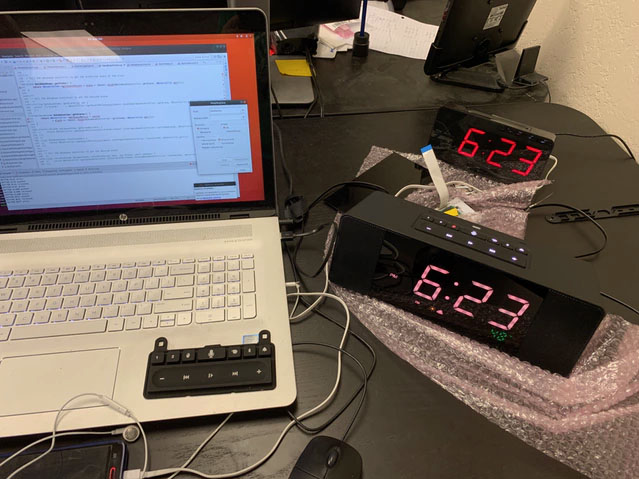 One of our dev's desk

Without getting into too many technical details, as we get closer to production, the time has come to change the operating system that the Doppler is running on. Fear not! This was always part of the plan, and we are happy to report it’s almost complete! Prior to this point, we have been using an off-the-shelf Linux operating system called Ubuntu for development because it’s easier to get up and running. Now that the show is over, the goal is to optimize Doppler’s software so we can maximize its speed and performance. As some of you may be aware, although Ubuntu is easier to set up, it also comes with a lot of unnecessary stuff that takes up valuable space, and won’t improve Doppler’s performance. Instead, we are transitioning to something called Yocto, which is an open source project that creates customized Linux operating systems for embedded devices (like the Doppler!). While Yocto-based operating systems aren’t as easy to work with and get up and running as Ubuntu, they allow us to get over-the-air updates for the Doppler working much more easily and efficiently. Once our Yocto is up and running, we will have a customized Linux operating system specifically designed for the Doppler. What do you guys think we should name it? Doppler OS? DopOs?

So, how will these over the air updates work with the Doppler? Here is the vision and what we are working on implementing now.

We plan on continuously supporting and adding new features to the Doppler after launch. So whenever we have new features or bug fixes to send to our customer’s Dopplers you’ll get a notification in the Doppler app saying there is new software available for your Doppler. You’ll click install on your phone and then the magic happens! Your Doppler will download the new software release (with the new features and/or bug fixes) over its WiFi connection and then restart itself when downloaded, don’t worry when the Doppler restarts it will keep all of your custom settings and alarms. We are working to make this process as seamless and automatic as possible. In the future, we plan on allowing your Doppler to automatically update itself overnight and still wake you up in the morning without having to trigger the update in the app. Our over the air updating solution also has the ability to revert to a previous good software release in case something goes wrong during the update. Now all of this isn’t easy to implement so we have been hard at work on making this a reality. 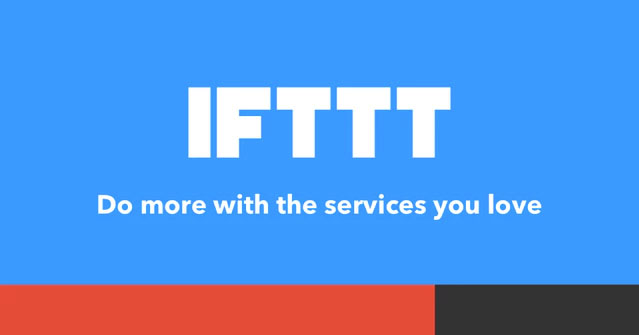 Another thing we have been working on is our IF This Then That (IFTTT) integration. IFTTT is a web-based service which allows users to utilize their internet capable products in conjunction with each other. As its name indicates (similar to conditional statements in computer programming), the way it works is: the user makes/chooses a “recipe” which takes a condition (IF This), and triggers a secondary action when that condition is met (Then That). This allows you to use the two quick access buttons on top of the Doppler to trigger an IFTTT “applet” to open your internet connected blinds or turn off your smart light bulbs. Integrating directly with IFTTT straight off the bat allows for a practically limitless number of customizations that the Doppler can use rather than building out lots of individual integrations ourselves. Around the office the past couple days we have been coming up with lots of different IFTTT recipes, like changing the display color of the Doppler if you have an unread email or you’re supposed to be in a meeting or on your lunch break. Look, we didn’t say that all of the ideas were good, but that’s the thing with IFTTT; you can quickly and easily get everything up and running easily without any technical knowledge. We will be sharing some of the best IFTTT use cases as we get closer to launch. Have a good idea for IFTTT? Let us know in the comments!

Thanks again for your patience, we are heading down the home stretch!