The Beta Units Have Arrived!

The first step in any production run (no matter how big) is ordering the necessary parts for the run. Each Doppler is made up of approximately 560(!!!!) individual parts which means we needed to gather and organize -- *checks calculator* darn near 112,000 parts! Now, this is a bit of an exaggeration as this count includes parts that the Doppler has hundreds of, like LEDs, but it’s still a heck of a lot of parts! We have been working on ordering these parts and the logistics of both the Beta build and the production build for the last couple of months and everything is under control. 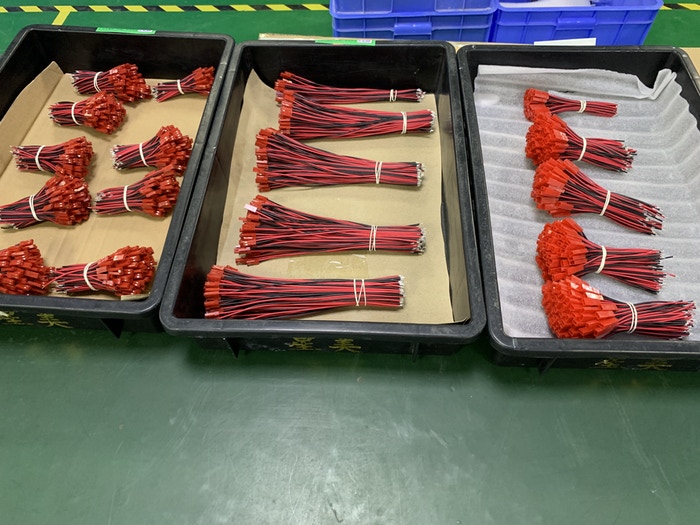 Some connectors for the Doppler 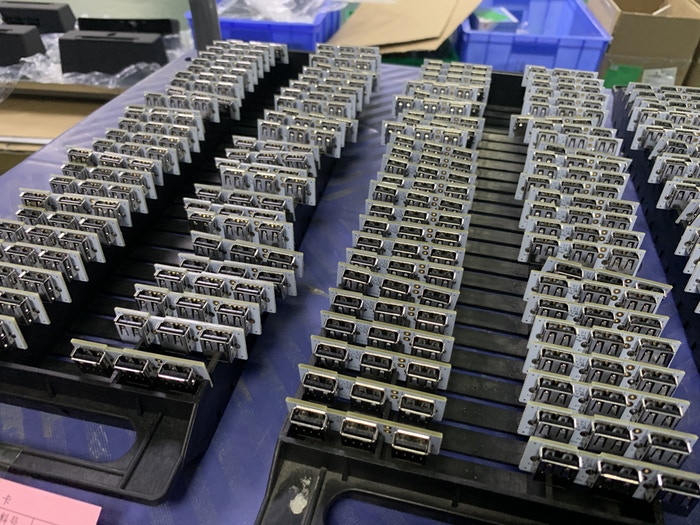 As the various parts arrived at the factory, they went through the IQC (incoming quality control) process to make sure they all met our quality standards. This process is incredibly important and is critical in order to have a quality product.

One of the more complicated parts of the Doppler is the buttons. These require a couple of different coats of paint and a laser to get just right. We want to make sure all the Doppler buttons look perfect, so during IQC we inspect and approve all the parts that work correctly and reject any that don’t meet our IQC standards. With the buttons, one of the more common failure points is light bleeding out where it shouldn’t, especially around the edges of the buttons. To test this, we have our QA technician shine a light from underneath the buttons and make sure there is zero light bleed. 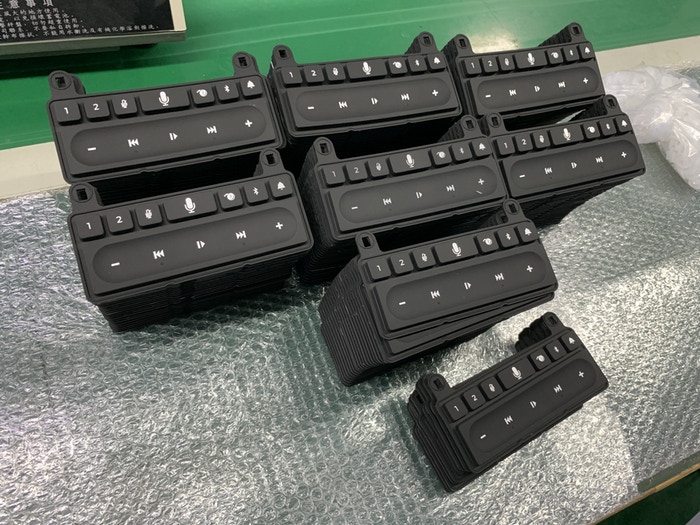 Choosing a reliable supplier is very important and our factory has a partner electronics assembly shop right next door with multiple SMT (surface mount technology) lines. Having a supplier right next door is very convenient when doing assembly on a board for the first time at a new supplier, but in general, the SMT process is pretty cut and dried and everything went well. The process is the same as we have outlined in previous updates just with slightly different machines each time. We were very happy to be able to watch our boards go through the assembly process. Here are some pictures from the SMT line during the Beta run. 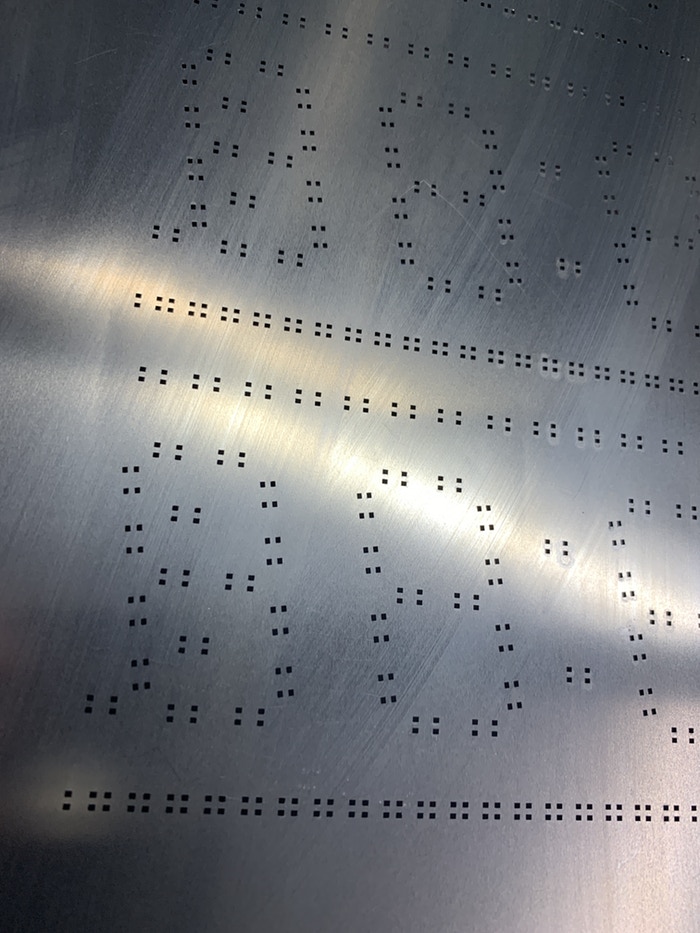 The stencil for the display boards 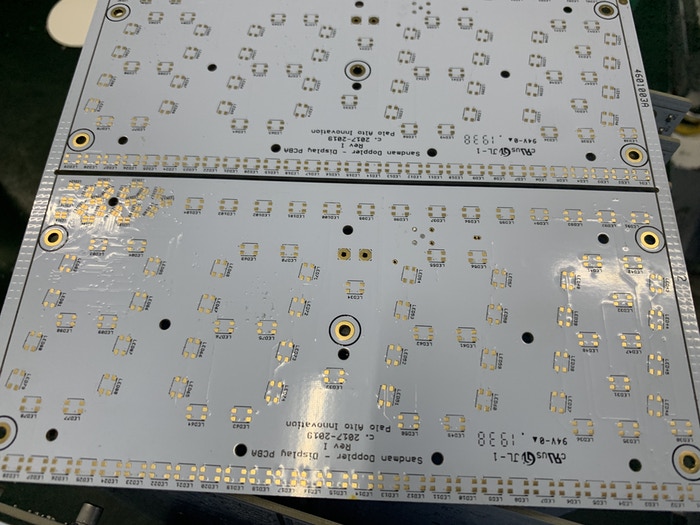 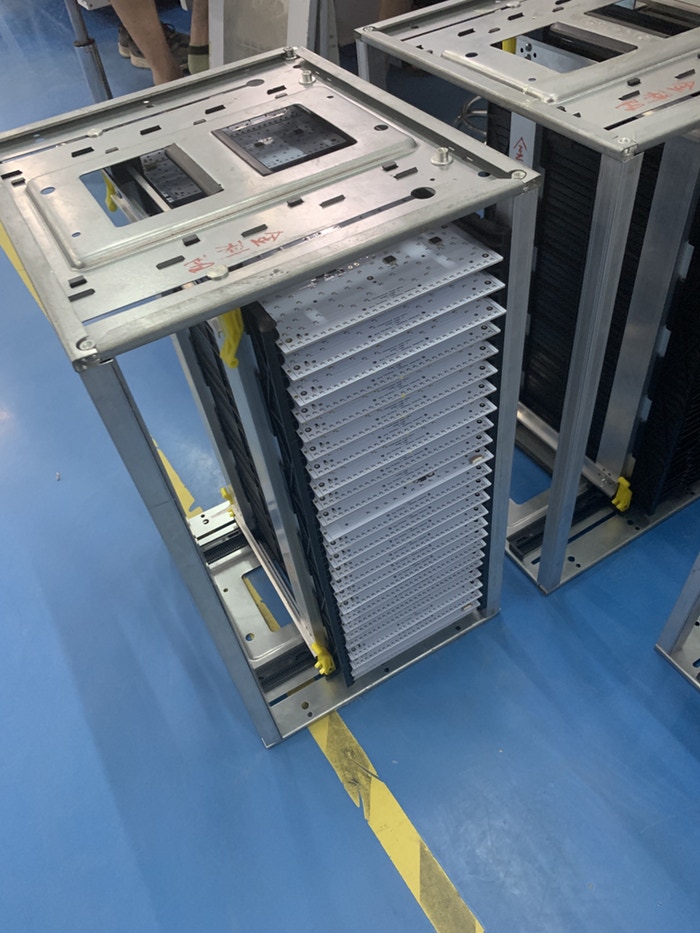 Boards ready to go into the SMT machine 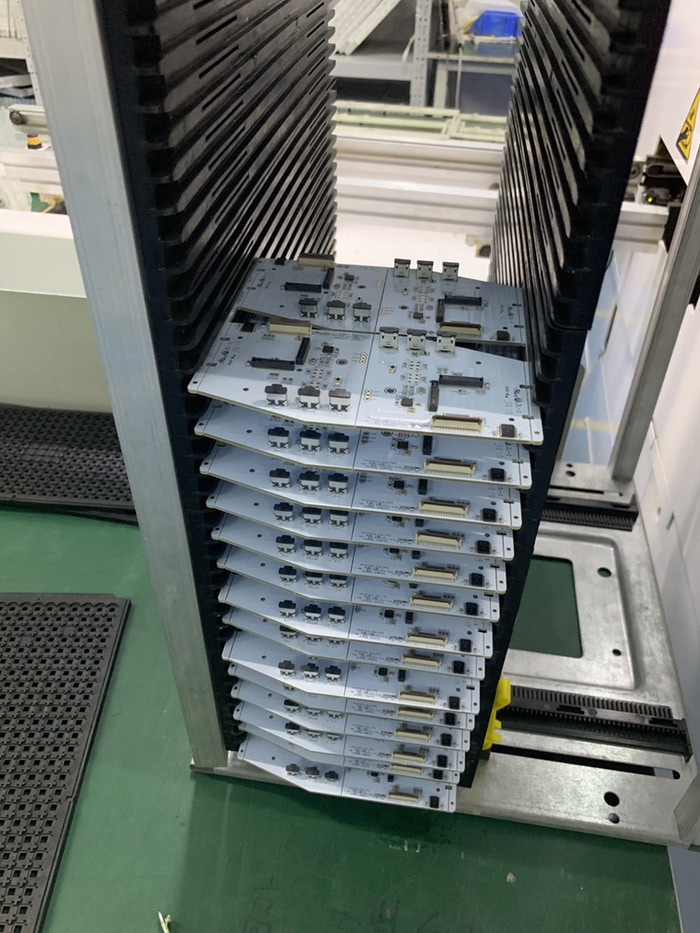 Carrier boards ready to go into the reflow oven

Arguably the most important part of the Doppler is the main display, so we are being extra careful with the IQC on the main display board. The Board had 122 LEDs on it, so in order to make sure all of the parts are correctly placed during SMT and all of the parts work we did a burn-in test, which requires the boards to sit inside an industrial oven for 5 minutes at 80 °C (176 °F) with all of the LEDs on. If all of the LEDs are still lit after the 5 minutes are up, we have a success! If the boards fail during this test, we obviously have a problem. If they pass the test and still work after 5 minutes it’s very unlikely they will fail and any point in the future. 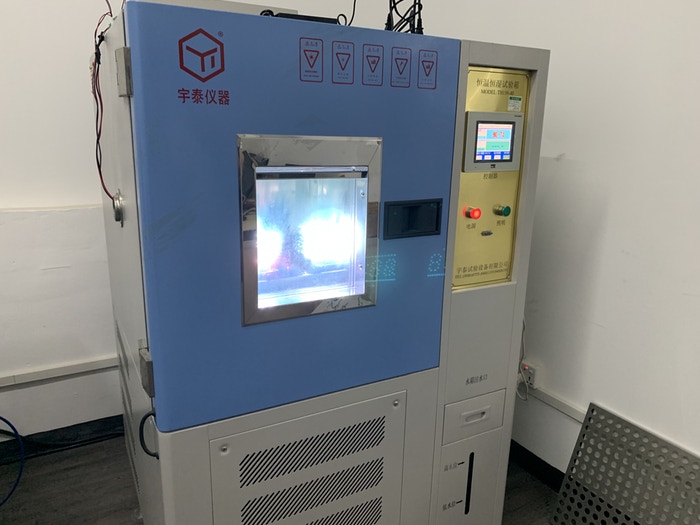 The oven we used for burn-in testing

After we tested all of the boards we had 97% of them pass our test, giving us a yield of 97%. For a Beta run, we were happy with these numbers and we expect these numbers to increase further as we work with our neighbors to dial in all aspects of the circuit board assembly process. Having the shop next door is really a treat and one of the advantages of working with suppliers in Shenzhen, electronics shops are everywhere!

To make sure that the Doppler meets our quality standards, it is necessary to do IQC on every part from the display board, to the molded parts, and even the screws. For example, during our IQC inspection of the main body of the Doppler, we noticed some extra plastic (called flash) that wasn’t properly cleaned. Having this extra material on the plastics negatively affects how the rest of the parts fit together… Not good. The injection molding factory is supposed to do this and did for the majority of the flash, but they missed some. So we cleaned up the remaining plastic with a razor blade. We then sent our workers and engineers to the injection molding factory to train their workers on how to properly clean these parts for the production build. This sort of communication and cooperation takes years to cultivate and we are really lucky to have these kinds of relationships with our suppliers.

Once all parts had gone through IQC, we went through and assembled two Dopplers carefully with the production manager and the lead process engineer for our project. We carefully assembled two Dopplers while we timed every step of the process. This time study allows us to gauge how long it takes for each and every step of the Doppler production process. Here are the two units we finished first. Beta 1 and Beta 2. 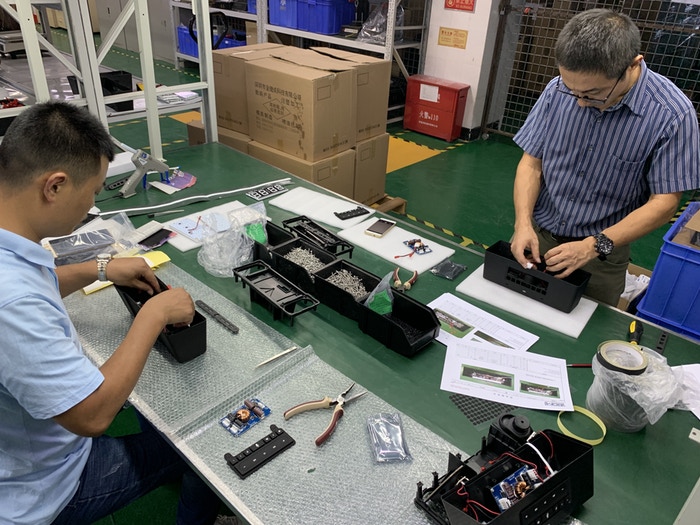 Working on the time study 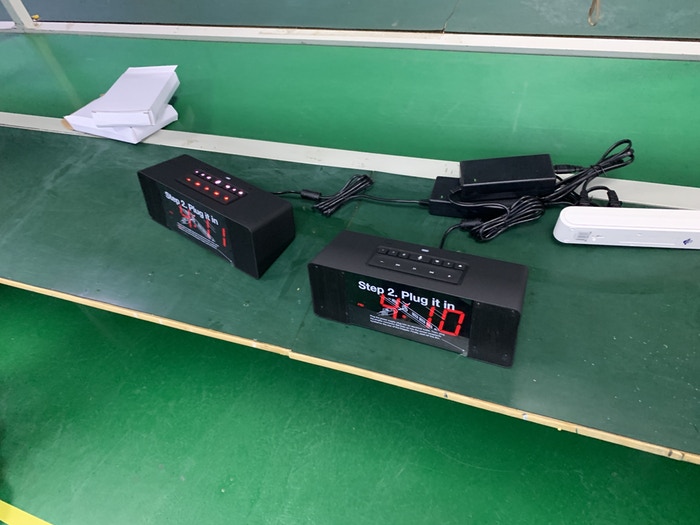 Once we had rough numbers on how long each step took, we bundled some steps together to make each “bundle” take approximately the same time so as to have a smooth and efficient production line. Having each step be equal length prevents buildup or bottlenecks at different assembly stations. Initially, you might think it would be better to do 5,000 of each task so that you have 5,000 finished units all at once, but the issue there is that if you find out you forgot something or were doing something wrong you have a lot of WIP (work in progress) parts that need to be fixed or redone. Fixing or redoing these parts takes time and materials. Instead of having large numbers of WIP, you move each Doppler through the various steps from raw goods to a finished Doppler as quickly as possible so if something is done wrong you limit the amount of wasted materials and labor.

At this point, the line was set up and we started making Doppler Beta units! Since we were in the factory, this allowed us to personally review the units coming off the line and see how they looked. We noticed a couple of issues (below), which we will correct before the production run. Some of these issues were a much bigger deal than others and discovering some of these issues is exactly why doing a Beta run is so important. 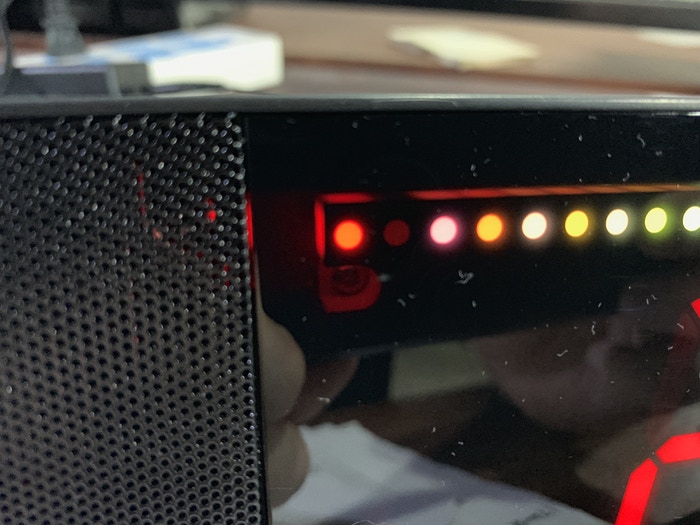 There is too much light bleed on some units. We are working on a fix. 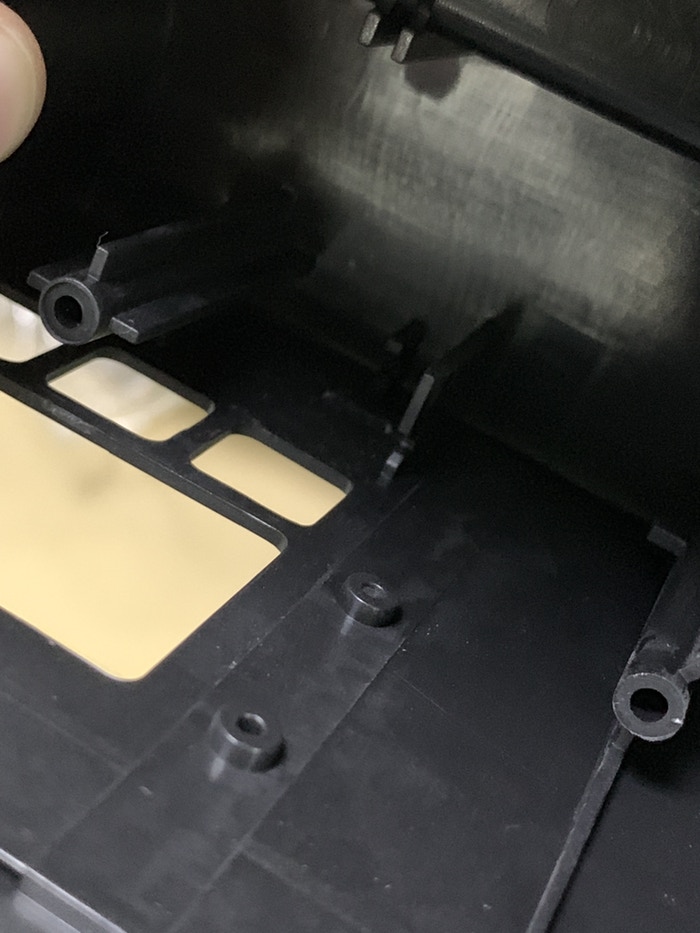 There was an issue with the injection mold of the body and these holes weren't properly molded. 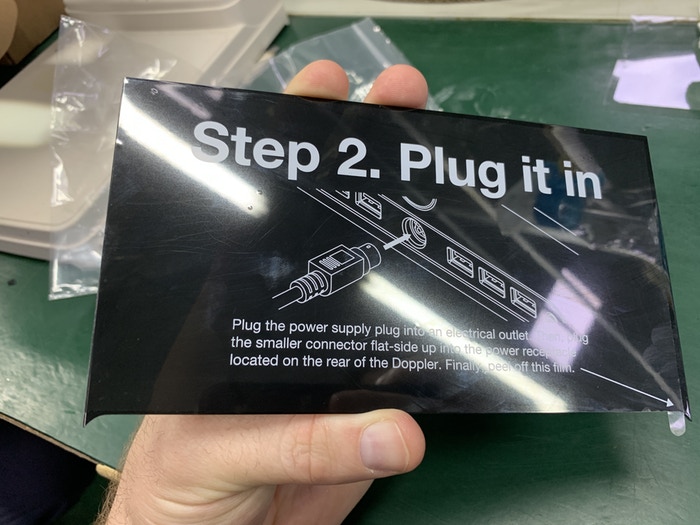 Getting the windows to be bubble free was very difficult. This was one of the better ones and still doesn't look great.

We also found a couple of firmware and software issues which we relayed back to our software team for them to start fixing.

We ended up making and shipping 120 units to our office before the Golden Week holiday started.

You might be thinking “wait a second, weren’t there supposed to be 200 Beta units?” and you would be right. What about the other 80 units? Initially, we were planning on completing all 200 before shipping them stateside, and we could have done this, but after discussing it we decided to take a slightly different approach. Since we ordered almost twice the number of Beta units as there are Beta backers, we have decided to not rush through the production of the Beta build so we would still have some unassembled Doppler materials before the production run started. These materials will allow our factory to train new workers in preparation for the production build. This means that instead of just using a couple of leftover samples, they can actually train workers with real materials and work on getting the production workers trained to build quality Dopplers quickly. We will also utilize some of the Beta units to send to the various certification companies to do testing associated with a quality electronics product like the Doppler.

Since the Dopplers left our factory, we have had an interesting couple of weeks. About halfway through Golden Week, our freight courier actually rejected the Doppler shipment in the process of leaving China. It turns out they gave us a couple of incorrect forms and this caused our shipment to be delayed until after Golden Week. This obviously bummed us out and slowed things down, but these sort of logistical issues do happen and unfortunately, this time it happened after we had left China, so there wasn’t much we could do other than wait for the holiday to end and for everyone to get back to the office. Slight hiccup notwithstanding, The Day finally arrived earlier this week and we got our shipment of Doppler Beta units to our office! 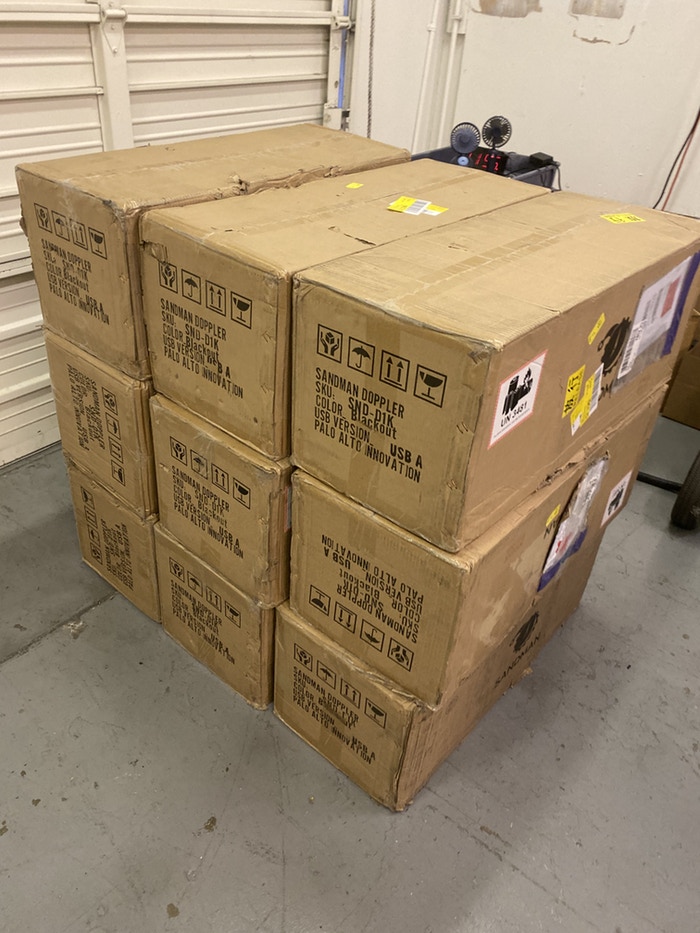 We have been working on reviewing the Doppler units in detail to see if there is anything we can improve before starting mass production.

Now the big question: When are we sending out the Beta units? We are currently having some issues with the Doppler App (getting the device online and connected to Amazon) and aren’t quite happy with how everything is working currently. Since this part of the setup is incredibly important, we are working with our App company in Israel to fix these issues as soon as possible so we can send out Dopplers to our Beta users.

Another not so great piece of news is our USB-C board upgrade isn’t working as well as we would like. The boards are actually giving us an error on some newer Android phones warning us it’s charging slower than normal USB. This is obviously unacceptable and we narrowed the problem down to a faulty USB-C connector design. Without getting into the technical details of USB-C charging speed negotiation, we have found a new supplier with a proper USB-C port and are remaking the boards. These are scheduled to be done next week and we will verify that everything is working properly, and then we will retrofit the USB-C upgrade for those Beta backers that have ordered USB-C.

Once the App is working better, we will reflash the Beta units to the latest version of the software, do a final QA, and then send them off to our Beta customers! We are hoping to get this done in the next couple of weeks. The good news is one of the biggest hurdles is over -- we have Dopplers in our warehouse! It’s going to be a busy next couple of weeks for us, but we are excited and anxious to get some units out of our warehouse and into our backer’s hands soon.