Here we are with another Sandman Doppler update and this one is long and important. So strap in and we will do our best to update you on as much information as we can!

First off and most importantly is the schedule update. We know this is what most of you want and are interested in, so we aren't going to bury it on the bottom of the update, it goes at the very top! Since we had to do some pretty serious design changes on the Doppler (moving the light sensor and mics, neopixels, and speaker baffles) after the campaign we haven't opened tooling up nearly as early as we wanted. We did anticipate this would happen to some extent so we budgeted some time for it. That being said, we would have liked to be further along than we are. While it's still possible to hit our previously announced launch date we wanted to readdress the schedule.

So, what does that mean?

Here is the current updated schedule next to the old one: 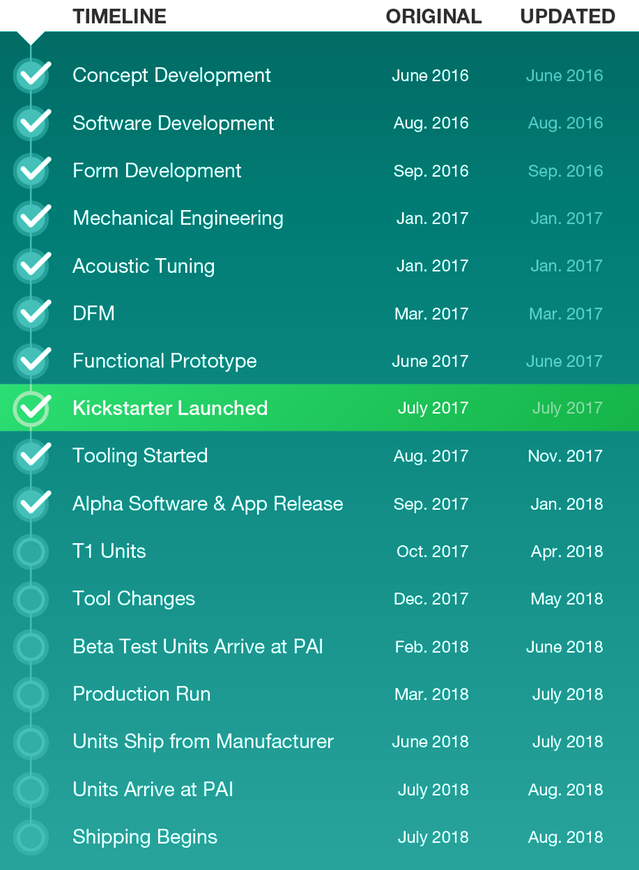 First off, the beta units will be late. No question there. The good news is we have gone through so much DFM (design for manufacturing) and prototyping in the last couple months with our factory's tooling engineers everyone is very optimistic about the quality of the units we will get from our first parts out of the tools (these are called T1's). Also, we will have lots of time to work on the software and get things to a better point for our beta users to test when these are ready.

General production will most likely be delayed a month. We are going to try and beat these estimates, but we would like to prepare you for your Doppler being a month or so late.

As we noted in previous updates we decided to make some pretty serious changes to the main display, microphones, light sensor and speaker enclosure. This required us to work closely with the factory to redesign the tooling. We went through months of DFM and are now confident we have a design that will require minimal tooling changes once first made. In order to test out our newest design, we went through multiple revisions of prototypes including the current prototypes we showed at CES, which look incredible!

How did we come up with this current schedule?

What's the next step?

The next step for the Doppler is to start cutting the steel for the tool! The injection molded parts are made out of giant hunks of steel that have to be cut and milled very precisely to create all of the features of the Doppler. We purchased the steel right before Chinese new year started and once the factories all come back online after the holiday we are going to start cutting. In 30 days or so we will get the T1 samples. These are the first parts to come out of the tool and we can't wait to see how they look!

We are sorry for this minor delay and we are working on getting these to you as fast as possible! 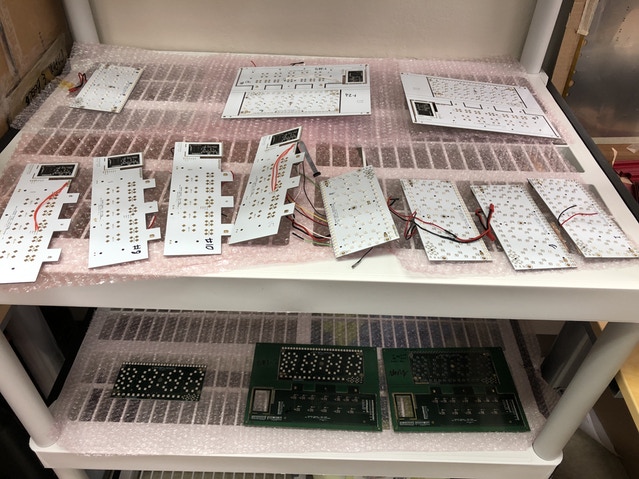 Some of our boards

We are currently working with our 5th revision of the Doppler board design and they are working very well but aren't quite there. We expect this next revision of the board to be almost production ready. The boards are made in one large panel that has both the button board and the display board in PCB. We can then carefully snap the boards apart when you want to put them into a Sandman body. The 2 boards are currently connected using header wires, but the next rev of the boards will use fine pitch connectors to allow for easier assembly and manufacturability.

Let's dive into the boards a little further:

The latest rev of the Display board

The Display board is responsible for showing the user the time and other dashboard information. The board is broken up into 4 main parts: The light bar, time display, dashboard, and secondary digit areas. In update #11 we discussed the difference between RGB LEDs and neopixels. Well, we decided to do a hybrid approach and have both types of lights on the board. We are confident this is the best solution for this product and are very happy with the quality of the display. The hybrid display uses 104 Neopixels to light up the light bar, main time display, and dashboard along with 20 RGB LEDs to light up the 7 segment part of the display. We could have made neopixels work on the 7 segment part of the display, but the area is just too small for it to work well. 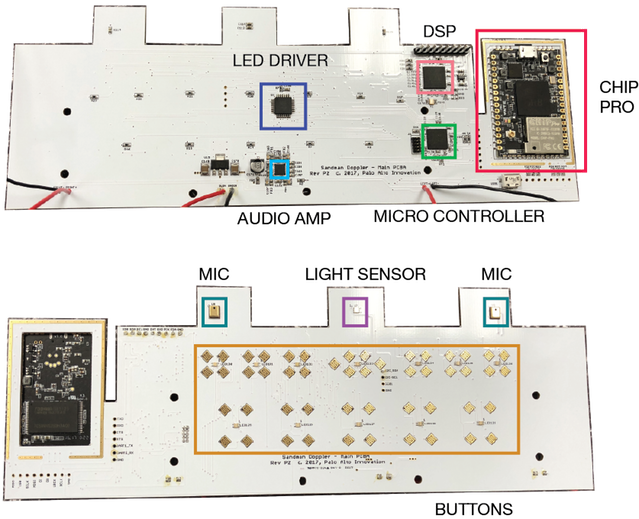 The button board in all it's glory!

The button board is where the magic happens! The button board uses 12 RGB led's to light up the buttons allowing them to be visible at night. There are also specially designed pads on the board for a type of button, called a carbon pill switch. Basically, there is a very small disc (called a pill) of highly conductive material on the underside of the buttons. When any of the pills touch the pads on the circuit boards this triggers the switch! The board also has 2 microphones on it which are used for Alexa and a light sensor in between them for automatic brightness adjustment. All of these lights and sensors are controlled by a custom programmed microcontroller that communicates back and forth with the main "brain" of the Doppler, the Chip Pro. The Chip Pro is a full Linux computer and is mounted directly to our circuit board, this is where most of the programming work will go into. Also on the button board is a stereo amplifier for the speakers, and a digital signal processing chip to help the microphones work better.

These circuit boards need a couple small tweaks which we are working on and we hope to release the next revision of the boards in a couple weeks.

CES 2018 and the prototype we have 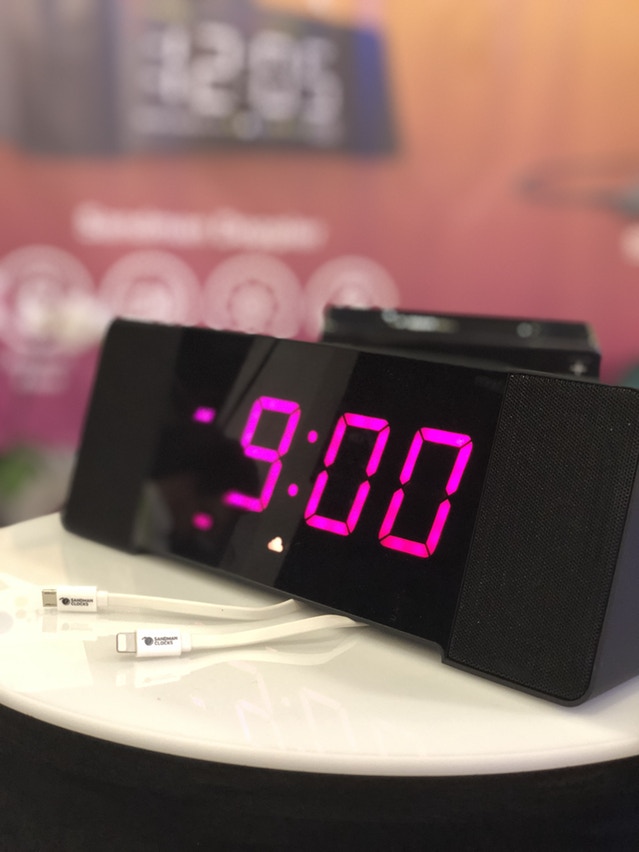 CES 2018 was a huge success! We had incredible feedback from almost everyone that stopped by our booth and had some huge wins in the media. We also made some great retail and distribution contacts as well as some strategic partners we will be announcing soon. The best part of the show was meeting two of our backers that stopped by and introduced themselves, seriously guys, thanks. 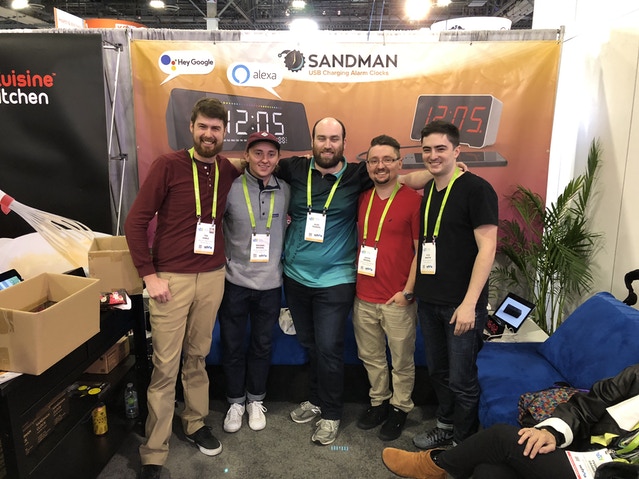 Our booth was pretty small compared to some giants around us, but we had the comfiest couches at the show (as we were told) and encouraged people to stop by, take a break and charge their phone (using a Sandman of course). Next year at CES we are stepping up to a bigger booth and hope to meet some more of you there!

One of our booth neighbors had these giant light up floating balloons. It was amazing.

We hope you all saw the silly little video we did at the show, well here are some better videos:

What time is it?

And of course, it plays music.

What do you want us to ask Alexa? Let us know in the comments! 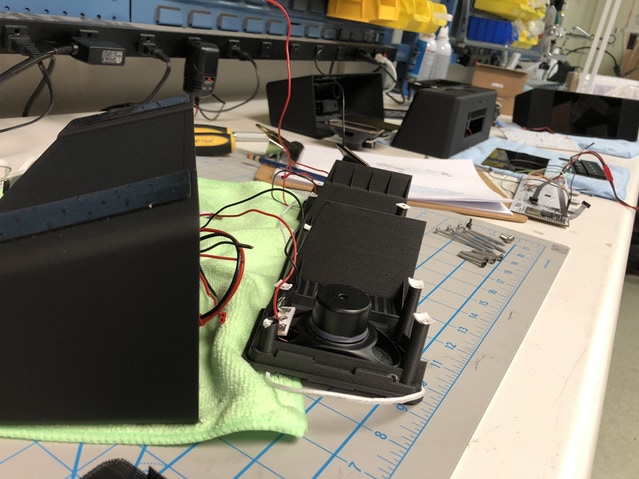 Some of our prototype parts

These prototypes are made out of a couple machined pieces of plastic that were then hand assembled and painted. They were then sprayed with the same soft touch coating that we will be using for the production units. Our guys over at factory did an incredible job on them and they look almost perfect. We now have a bar to aim for with our injection molded parts that will be coming off the tooling, shortly. There are some things we want to improve, mainly with the buttons and the display, but we are confident those can be fixed in production. 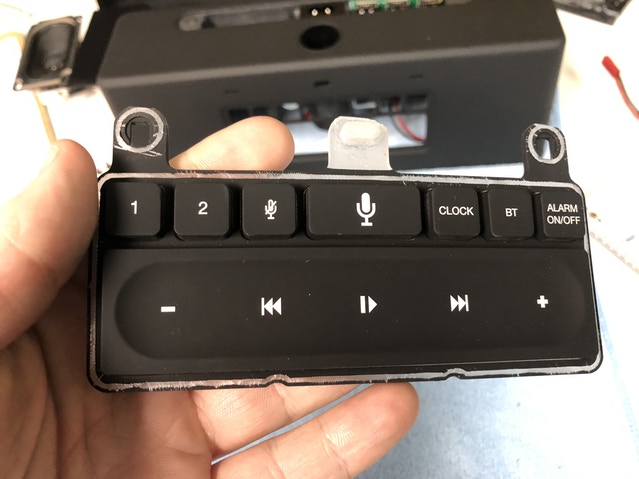 A closeup of the Doppler's silicone buttons 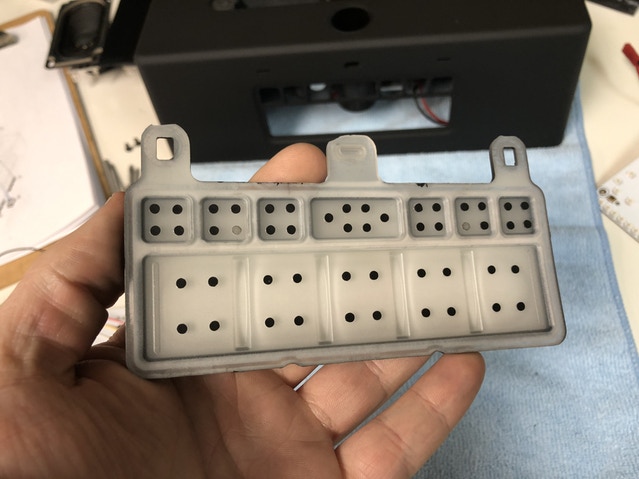 The back of the buttons, featuring carbon pills 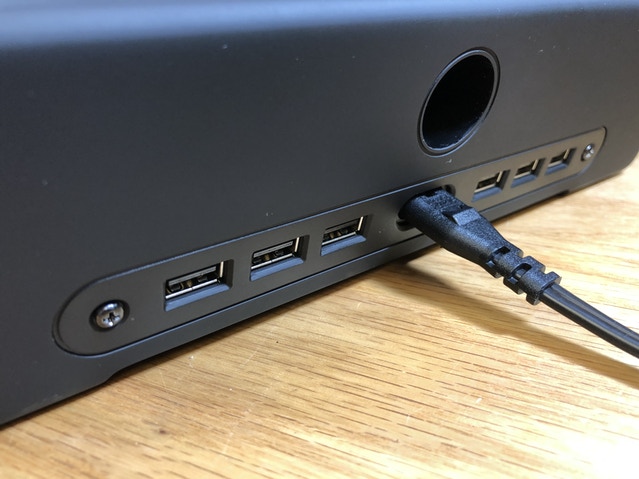 The back of the Doppler 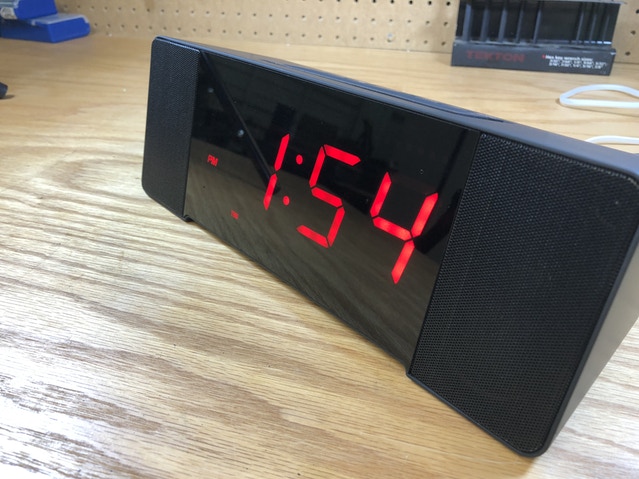 While we have been working hard on the engineering side of things we have been working on the website as well! Right before CES we launched sandmandoppler.com and sandmanclocks.com! Both sites are dedicated to one product each and we love how both of them turned out. If you can, please share with your friends! We are also still live on Indiegogo on-demand and are selling pre-orders over there as well. Spread the news!

In the next update, we plan on discussing updates to the Software, App, and to Alexa. We can't wait until all of you guys get your hands on a Doppler and I'm sure you're going to love it. If you ever have any questions or comments please let us know via Kickstarter, social media or email. Thanks again for your passionate support!