Coronavirus can’t stop us! But it will slow us down...

Home   News   Coronavirus can’t stop us! But it will slow us down...
Doppler

As you have probably heard, there is currently an epidemic of coronavirus that originated in the Wuhan region of China. Even though Wuhan is about 1,000 KM from Shenzhen (the region of China where our product is made) efforts to contain the spread of the disease have adversely affected ALL supply chain operations within and involving China. Shenzhen was shut down for an extra week after the New Year holiday and then there was a mountain of paperwork to be able to officially open up for business again due to the virus, but the good news is that all of our people are healthy and officially back to work. 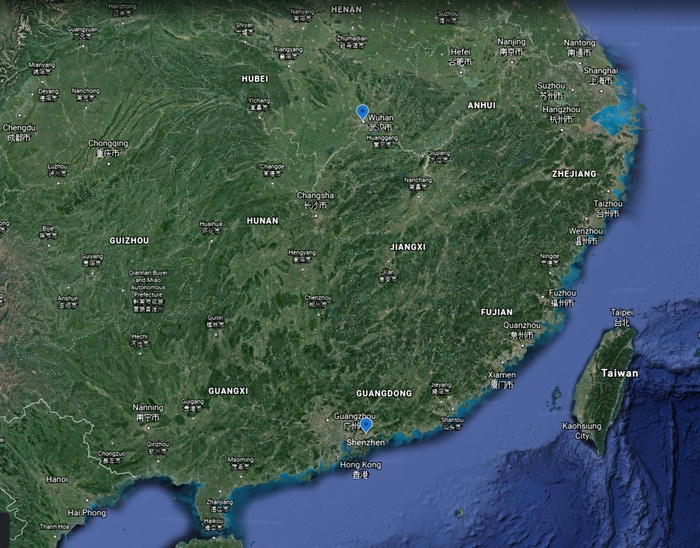 Wuhan and Shenzhen are about 1000 KM apart, but things spread fast.

The bad news is that the 2000 finished Dopplers that were packed and ready to get loaded onto a boat are still packed and ready to be loaded onto a boat. We missed the last boat out of China before Chinese New Year and the port still hasn’t opened back up yet due to the virus. This is a fluid situation that is truly unprecedented in the world, so please hang with us while we work through it safely. We are not the only ones trying to get products out of the country, but we are estimating that we should be able to get the 2000 Dopplers out of the country by the end of next week.

In the meantime, at our office in the States and in Israel, we have been working hard on getting the app ready for the Beta testers. The Beta units are sitting in our warehouse and are ready to go out as soon as we have an app that is ready for testing. In the last couple of weeks, we have been going through an internal QA process to make sure things are working decently well. We aren’t 100% happy with the app’s performance and we are continuing to tweak things to get them working better. That being said, we need to get the Doppler into your hands, so we have decided that next week, we are going to start the beta process even if the app isn’t working as well as we’d like. 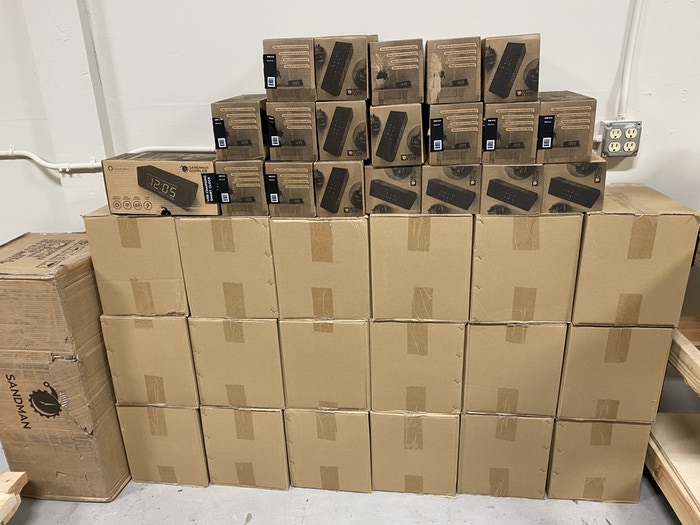 The iOS app is in a more finished place right now than the Android version, so we are going to start the Beta program with those that have iOS devices. We have chosen and notified 20 iOS Beta testers that will be getting the initial units. These testers will make sure there aren’t any show-stopping bugs we might have missed. After we are confident there aren’t any, we will send out the remaining Beta devices to those Beta testers with iOS devices (about 40 more testers). We will then focus our efforts on the Android version and once it’s passed our internal QA process we will send out the Beta units to the remaining Beta testers.

We will admit we are nervous to finally send units to customers, it’s been a long time and a rough road and we are hoping all goes well! We do expect things to go wrong and some Beta testers to have trouble setting up and using their Dopplers. But, this is what Beta testing is for and we are looking forward to all feedback.

Along with testing the app and squashing software bugs, we took the Doppler to a local acoustic testing lab to verify that the Doppler will pass Amazon’s Alexa certification testing process. The acoustic part of this testing verifies that the acoustics of the device respond appropriately to a battery of tests revolving around the word Alexa. We are very happy to report that the Doppler passed all of these tests with flying colors and the microphone system we created even performs better in certain situations than an Amazon Echo Dot (which has twice the number of microphones the Doppler) does! 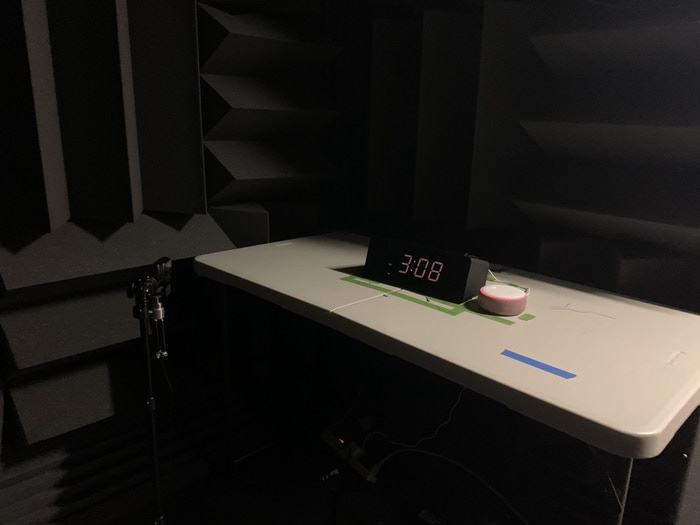 The Doppler and an Echo Dot being tested side by side 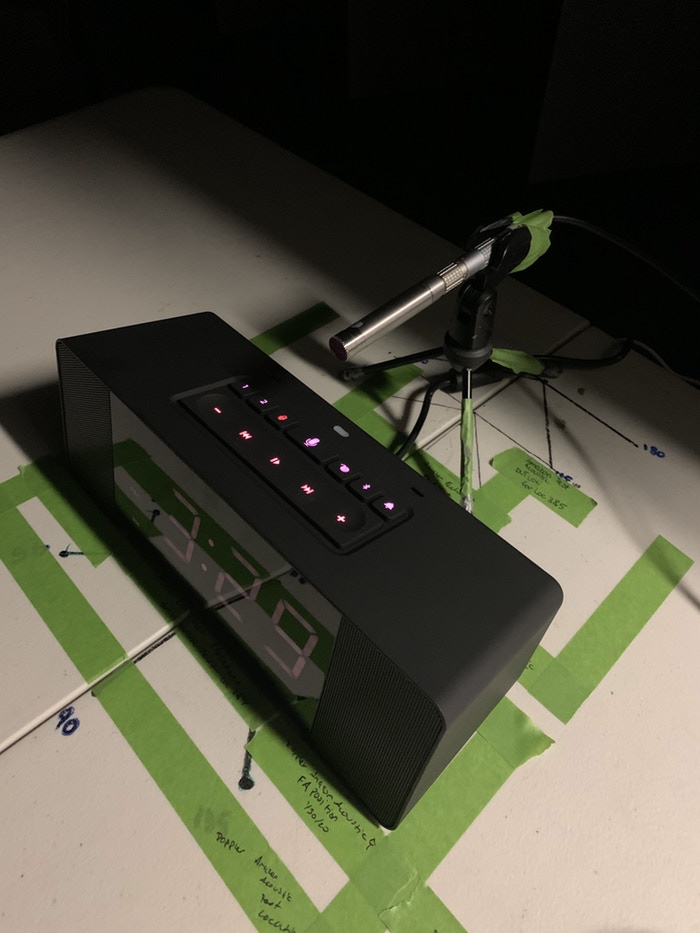 Setting up one of the tests 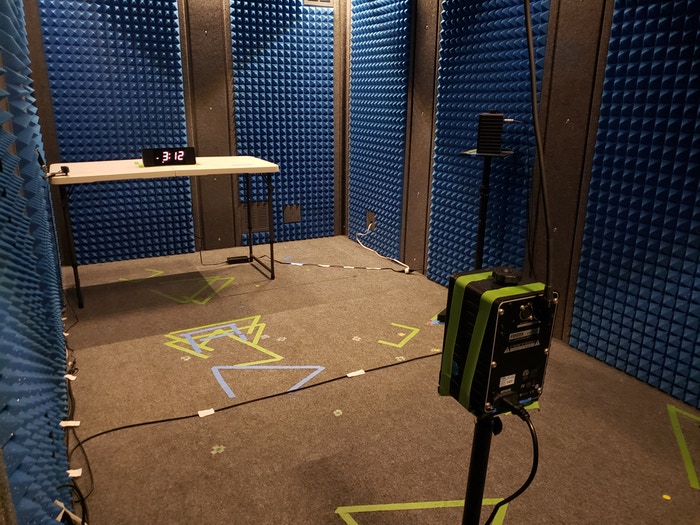 The Doppler during a far-field voice test

Lastly, we have been outfitting the new warehouse space next to our office to prepare for the arrival of the Dopplers. Since we will be flashing all of these units with the latest software build before they go out to you all we have been designing a Doppler flashing cart. These carts are metal wire shelves on wheels that store and power 20 Dopplers at once with a single power cable. This will allow us to batch Dopplers during the flashing process. Once the flashing process is over we will be doing a final QA on the Dopplers before packing them back in their boxes and then finally off to our backers to enjoy! 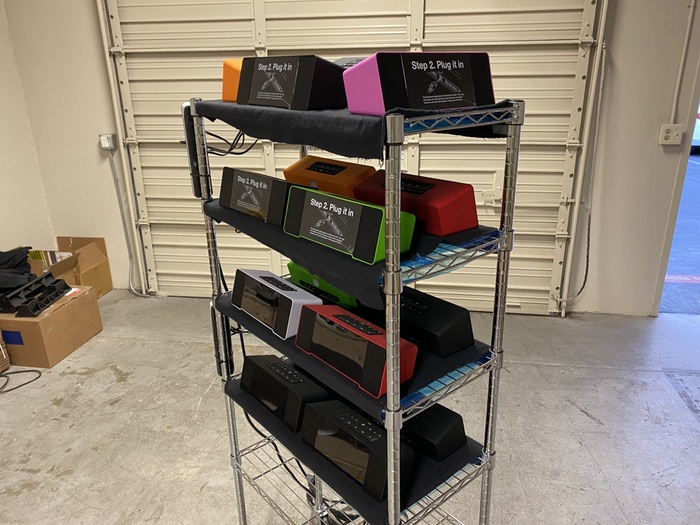 In the next update we hope to report back how our initial iOS Beta Dopplers faired, we are crossing our fingers for good user experiences. The wait is almost over!